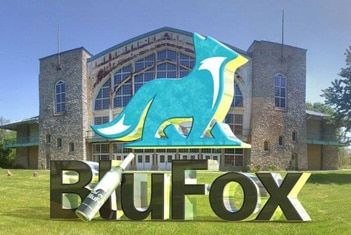 [uc_dropcaps style=”uc-normal”]B[/uc_dropcaps]luFox went though a couple of design concepts for their logo – even a name change before BluFox officially came to be. When I finally decided that I wanted to start up my own business after graduating St. Clair College for Internet Applications and Web Development back in 2011, I knew I had to start with 2 things; A company name, and a visual demonstration of my work. Both of which were already in its starting phases during college with a website named “Andrew R.A. Oliver” that was made to showcase my college projects, as well as two websites that I’ve created.

Finally, the BluFox logo was starting to take shape. This is an early concept of the logo. A modern style logo to be kept simplistic and versatile. I wanted to have the logo in such a way that only one color is used on a white background should I choose to print it, or use it in other media formats. Nothing complex. This design was modified and worked on until the final logo was created:
This is the final logo for BluFox. The back half of the logo has been adjusted the most, and the two furthermost legs has been connected to the base. This was to ensure that there was no floating pieces of the logo should I ever decide to create a 3-D print version. A square, strict monotone logo was also created for anything that is square formatted such as icons, simplistic tags, stamps and watermarks, while maintaining the company name in an easy-to-read format. The name was put into an extended base, with the bottom corners squared off.
There was a change in both font and structure of the text as well. The font is now bold, and the F is capitalized. This was in effort to help the reader to distinguish the two words more quickly, and to hopefully show that both words are 3 letters, lessening the changes of misspelling Blu for Blue. There was also a concept used to stack these words on top of each other as well, but the text seemed off balance with both capital letters on the left side.