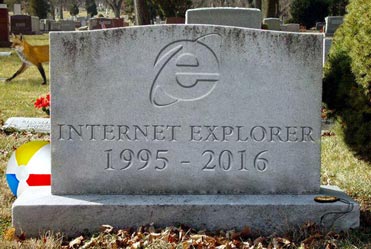 Microsoft simply did not give Internet Explorer the care and updates it needed throughout the years; it wasn’t a priority to Microsoft as it handled Word, Excel, PowerPoint etc. According to StatCounter.com , within the year 2015 worldwide, Google Chrome has been the most commonly used browser followed by Internet Explorer, Firefox, Safari, ‘other’ than Opera. The success of website browsers is highly dependent on speed, compatibility across all devices and flexibility.

As of January 12, 2016, Microsoft stopped supporting Internet Explorer 7, 8,9 and 10 in exchange for Microsoft Edge, However, those with Internet Explorer 11 still on your computer will still receive security updates, compatibility fixes, and technical updates on Windows 7, 8.1, and 10. While Edge does feature a much more compatible and quicker experience, it is still not up to par with today’s standards. Let’s hope Microsoft Edge leads to a more promising future, however, in its current state, it still doesn’t measure up to Chrome, Firefox and Safari.

BluFox is a professional web design & development company in Windsor & Essex County giving you only the best designs. We create professional and effective websites quickly as well as providing computer and multimedia services.